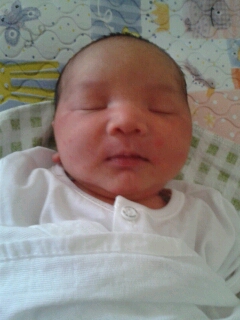 Thank You God for trusting us with this amazing handsome prince. we've been praying for him even before the mom (Mimi) said yes to wed her handsome hubby, Epul. baby, your mom and I had been talking about you, long before you were conceived. and here you are, completing our lives.

Baby, teach us to love one another despite our differences. to cherish each other, while we have the chance. to support and hold each other dear in our heart.

my your namesake: Izz Naufal be true, you to grow a strong man, bringing glory and prestige to your family, your God and to be always generous, the way your mom and dad do. in everything you do, know that, you are loved by many. (including this aunty).

mimi and Epul: How can i ever congratulate you? he is yours. a miracle. 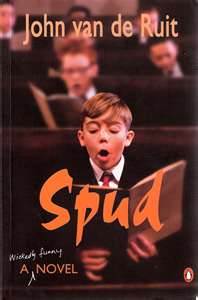 i bought this book while holidaying with the family in KK last week. i brought a Doris Lessing book (Sirian Experiment) from Kuching, but, really, i have trouble reading extra-terrestrial type of book. if you've read my closing post for last year's best book i'd read, its a Doris Lessing (so i thought, i'd be blown away by Sirian Experiment too). no, i was not with Sirian.

so, after a heavy dinner at Brooklyn with a long time dear friend, Dawn and my sister Popong, we decided to stop by at Times (1Borneo) to look at books. we're not planning to buy any, just browsing over. Dawn with her newfound Linsanity thingy and Popong still have quite a lot to go of R.R Martin. then i saw spud. SPUD!. never heard of the author, and that's a good thing, because, i wont expect anything. he's South African by the way. at least its a penguin, so, it must be quite good.

the book was written in a diary format, nothing new in that. i'd read several books with that format. but, this one stand out for being almost real. written in perspective of a 13 years old boy, white, boys boarding school in South Africa in 1990, the year Nelson Mandela was released from prison. oh! spud is the narrator's nick name, refering to his not so developed yet penis. 30% of the story is sex-related, as one should expect from a hormone raging age. no details past the heavy petting though, so, go get yourself a Grey instead (i heard its quite intriguing).

Spud is interesting because it voices out the longing of a teenage boy, in a sincere and straightforward way, that make it highly humorous. and at the same time, the honesty stabbed right through heart. this book reminds me of forgotten years of carefree, friendships and young hearts. this book is wickedly good.