i reread my recent post and think: damn! apahal pula sy tulis title dia mcm tu? mcm apa saja.
we won the battle. not as a champion, but in spirit, we knew, we are better. the kids (5 bands- performed their best) and from the mouth of one of the jury (that handsome drummer- sepa sudah dia tu? that Bidayuh man yg saaaangat good looking that!). he said: awesome bands. indeed, you guys, great!
so, today, i have a sore throat. (3 hours of constant screaming last saturday). thank God, my monday, no class.
Philip and Jenny tied the knot last saturday. congratulation.
28 days to decide on the plan : Java Jive 2010: 1-10 october. OOOOO God, i'm giddy with expectation. a backpacking tour. i am so not me!
on January 31, 2010 7 comments:

The Murum dam, located about 470km inland from Miri, is the first of 12 new dams that are to be constructed throughout Sarawak The Star online, 29 Jan 2010
in 2008, we did a Sanitation and health promotion project among the Iban folks down the river of Batang Ai, Lubok Antu, Sarawak. specifically, we were in Ng. Delok (nanga (river) Delok), some 2 hours boat ride from the jetty of Batang Ai Hydroelectric dam.
if you can imagine a small island of approx 5 km in diameter, put the longhouse (of 14 doors) (approx 5mX15m per door) at one corner, you're imagining Ng. Delok. it used to be the pinnacle of a hill, but, ever since the 'flood' in 1985, their hill has been reduced to a small island as it is now. these people are those who refused to relocate. (and, i guess, those who chose to relocate, fare no better).
the Batang Ai dam is a water catchment area and a hydroelectric generating dam. ironically, no electricity, no clean, treated water for any of the settlements scattered over the vast artificial lake.
i spent about 3 weeks with those folks down river (in 3 visits). they are the most contented people i'd ever mingled with. they tap their rubber for little money, catch fish, hunt for meat, take the jungle produce (whatever little left for them- they're living in a buffer area of a National Park), tend to their patches of paddy field and make tuak. (O! i survived their merriment procedure with my dignity and mind intact).
but somehow, somehow, i wish, instead of wasting time and energy arguing about the legality of some words to be used for certain group of people. maybe, its time to consider giving people more choices/ options in life. like, maybe giving those folks down river options of having or not to have electricity/ treated water, and maybe the options to keep on writing/ calling the name of God in any way suited to ones liking.
i know, those folks down river wont mind a change or two. electricity will mean all night through karaoke session with an opening prayer to Al lah Ta'ala (God in Iban)
i sincerely hope, Sarawak will listen to the voices of its people and not being bullied by a white hair ape or the trans-sea-monkeys, and certainly not being pressured to win the rat race of so called development. in the end, we're only trying to give people more options in life. its up to them to pick their choice.
(this morning i was presented with a choice to pick a red/yellow rambutan, i took both. we can be too selfish, sometime). and yesterday i picked KWSP instead of pension option (to the dismay and stringful of good advices (against) from our PT). and now, i'm doubtful over my choice.
the latest story of Bakun Dam
on January 28, 2010 5 comments:

it's a very good monday morning (drizzle just a bit) and it's payday! (so, everything seems to be naturally extra cheerful today!)
battlefield #3~ manang! yay! (apalaitu?- if you knew my hatred for injection) you'll know, this is indeed an achievement! 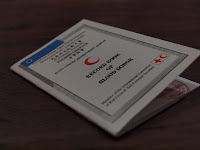 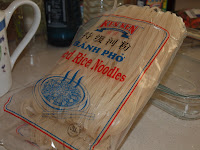 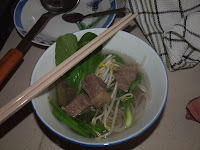 Pho Bo
it's quite ok (not exactly satisfied with the result) . i'll make another batch this week. most of the herbs needed to make the soup distinctly Pho were missing. but, roughly, i got the idea, of how the taste should be. (sawtooth herbs, bone + marrow, tendons, cilantro, corriander seeds, daikon, hoisin sauce).
Battlefield #1- this saturday. i wish, i wish, i wish!
it was saturday night when we worshiped, i'm positively sure, He's there. Roney, Bro. Peter Paris, thanks. kirim api, angin, hujan dan minyakMu.
p/s : sekali lagi Tuhan, kirim api, angin, hujan dan minyak Mu.
on January 24, 2010 21 comments:

we survived the audit. Barely.
looking forward to win Battle of the Bands (30/01/2010). Yay! we even have a yell for our team. (i want nobody, nobody but you!) ya.. the wonder girl's (Korean) new hit. we certainly will have a blast! 5 teams from our college. we want the title for best guitarist, best performance and most popular band of the night... (buli kah itu kids?) (nahhhh.... just enjoy the whole thing pun ok sudah) 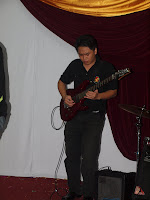 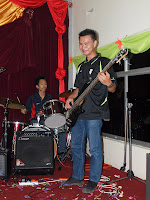 them!
I'll be out this evening to buy ingredients for Pho. (a friend keep on nagging about it ~ so, bah). Wish me luck in battling my way to those ingredients and putting it to a decent (enough) meal. i'll brag about it later.
battle of fear tomorrow. derma darah!
on January 15, 2010 2 comments:

of being a dog

last weekend, i had a good time with a good sister (who, despite her busy schedule, dropped by Kuching en route Sarikei -KL to be with her friends). and also Dy! (i enjoyed the jalan2 macam tourist di carpenter st). HAVANA is not a bad place to chill out, especially if ones prefer loud music. plenty of 'good stuff' to feast on too. hahahhahahahha.. i'm referring to the cool bartenders! (and i really should go out more often.. sigh*)
we'll have our SIRIM surveillance audit on 19th january. so, ya... work like a dog. 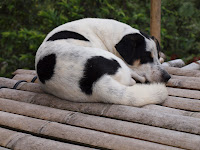 and we got 94 boys for our january cert intake. 28 sabahan. (i hate to say this, but ya: i'm nervous to teach their class~ it's intimidating!)
i'll start writing a travelogue for our Jakarta-Bandung trip. (we do our research mostly on other's blogs/ travelogues ~ loaded with small but important pointers).
a reminder for myself : january is a good month to Proverbs 27:23
on January 14, 2010 15 comments: 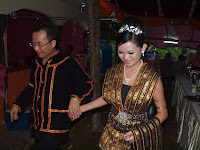 and also to an old friend of mine, Lily! congrats. sorry lambat datang ko punya wedding. tidak sempat pun p church. u knew about the flight and so on...
janny and betz, thanks tejumpa korang juga. wah! lamanya tidak jumpa korang! 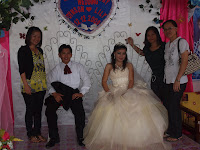 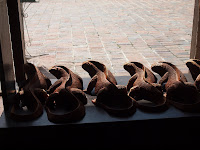 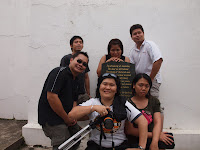