Heart of The Matter by Emily Giffin

i make a separate post for the second book read over Merdeka weekend, so, it'll be easier for me to do the linking at the end of the year to conclude my reading counts. 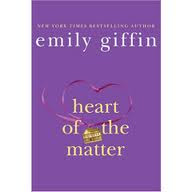 A very light reading relative to the first book. a story, you'll be able to get, even if you skimmed it through (as i did). another attempt at dissecting the cheating spouse phenomenon. a good attempt because at least it was told by the two inflicted women.

okey, here's the summary: Tessa and Nick are happily married with two great kids (Ruby and Frank). Tessa, decided to quit her academic profession to take care of her demanding children and to have more quality time with her family. Nick, a renowned plastic surgeon supported her decision.  a year into her homemaker role, Tess suspected her husband to have an affair. Nick befriended a single mother, Valerie, whose son Charlie involved in a nasty burn accident. Valerie, an independent and stucked up lawyer was drawn to the warm, sympathetic doctor. and Charlie needed a father figure, someone's missing in his whole life. Tess, by aid from her tennis buddies found out about the affair. Tess confronted her husband of 10 years. Nick was to decide what he wanted in his life. he chose his family.

No twist in the story. it's expected. Maybe, all married couple should read this, to brace themselves with the inevitable. and just because this book talked of man cheating, the reality of any relationship to work is that it takes two to fulfill, even an affair is sort of relationship. if you know he's married, he's untouchable. this remind me of a colleague who found her 'jodoh' with an older, married man and her nasty "nak buat macamana?, dah jodoh saya" comment. She broke family apart and said that? palui!. she refused to be second wife. so the first wife with 4 children was divorced.

just watch Private Practice where Dr. Addie bitterly declined advance of Dr. Noah Barnes in season 2 of the series to understand the longing and chance of an affair thrown away. in life, love and passion are not everything, baby.

merdeka weekend and A Clash of Kings by George R.R.Martin

Over the long weekend for Merdeka day, i managed to read two books. despite the time taken for rumah terbuka and entertaining a penggilan (wedding invitation).

The first book was easy, as i've been through 2/3 of the book earlier of the week. i may change my mind after i read more of the series (this is the second book of the planned 7 and i haven't read the first nor watch The Game of Throne series). but, the book is boring. reading the law of ancient Mesopotamian and Sumerian law are way more entertaining (ya, i read to articles about these to find if there's law regarding legality of marriage~wife in the Mid-Bronze Age, Abraham's time. Hagar was not his legal wife.).

Back to the book. i faced a hard time remembering the characters. let alone the terrains and their realm. maps are provided, but, hahhaha.. i have no talent comprehending maps. The Stark's family is quite interesting, especially because they have direwolves and I'm drawn to side with them, (to Arya and Bran). my sister read the series and i might pick it from her. but, for now, i am not overtly crazy over the series. 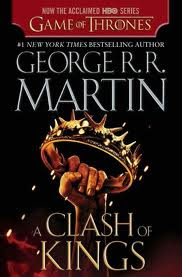 because of the low key lup-dup i experienced throughout the reading, i rate this book at: 4/10